What do you think about Valerian and the City of a Thousand Planets? 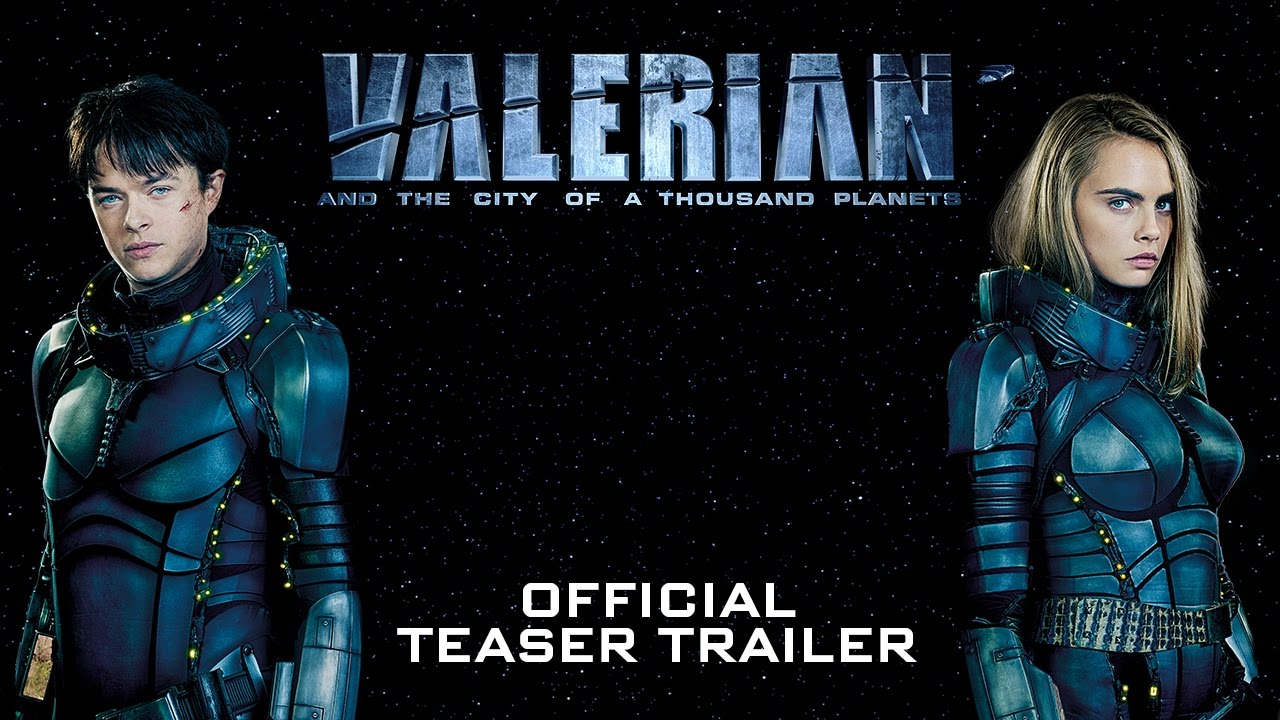 and this reminded me of the “Movie Talk” Blades pre-show, so if anybody is waiting for a spiritual sequel, this should be it

It is based on Valerian comics ilustrated by Mézières, who worked on concept art for Fifth Element.

This is even more interesting based on the fact that there is a new show in the pipelines, helmed by Adam, that has as its inspiration Guardians of the Galaxy and by illustrations of another famous comic artists, Moebious, who worked on concept art for Fifth Element as well

What do you think?

It’s like someone took the most pain in the rear platformers and made them into a movie.

While I’m looking forward to them trying to pick up Valerian et Laureline, which I adore, I also am worried the will not do it justice. The aliens and the Setdesign look great, but the actors they picked up for the two seem… really… unfitting. Valerian was a handsome, if roughlooking guy in the comics, while Laureline was repeatedly described (by other people in the comics) as being very beautiful - both of which I don’t really see [at least not in the trailer]…

Also I just found out they made an animated series in 2007, which does seem to be reasonably close to the comics - which I’ll have to watch now. Goodbye.

This looks AWESOME! Immediately thinking of this topic: Inspiration Thread: Sci-Fi - I need to summon @AdamKoebel


@adamthecamper, if you move the youtube link to a new line, we get an in-forum player, I think! Maybe the @moderators can help in this regard

The song is “The Beatles - Because”, by the way…

I might be one of the only few who just really hated the trailer, I’m an avid film goer, so much so I constantly get asked by people who want to know about a film they are thinking of watching without spoilers, so I might just watch too much and be jaded.

Also I do not know about the comic, but realise it is quite iconic in the graphic comic-verse so it is a big deal to a lot of people. But to me this film looks bad, so bad, a cross between Enders Game, Jupiter Ascending, Indipendence Day 2 and John Carter bad.

Now I know it is only a teaser trailer, but after seeing so many films over the years with their trailers that deal with action sci-fi it always fails when you try to add this much CGI to make it acceptable to source material along with actors not seasoned enough to fill the roles.

I will not be sorry if it tanks, because apparently companies have not learned from the before mentioned films on how to make a decent film true to source material this loved.

Doctor Strange relied very heavily on CGI to be faithful to the source material.

I don’t think CGI is an indicator of a bad movie, but it’s obviously not an indicator of a good movie either. All it indicates to me is that the director had better be on point with his creative vision in order to convey set immersion to the actors.

Time will tell as we get more trailers, but even then a trailer can be a deceptive read of a quality. In recent years especially, we’ve had a lot of great trailers for mediocre/terrible films.

I’ve been hearing about this film for a few months now, and I agree - it sounded exactly like something @AdamKoebel might be aiming for with the new campaign before we had anything to even look at.

But now, we have a trailer (well, there’s the graphic novels too).

It has not gotten me excited even though I am a huge space opera fan. I can’t judge the film on that little clip. All I’ll say is what I said on discord - I hope the film has better fighting that what was shown in the teaser.

Ok, I think I need to find that Valerian et Laureline animated series

But to me this film looks bad, so bad, a cross between Enders Game, Jupiter Ascending, Indipendence Day 2 and John Carter bad.

Did you see and like the Fift Element? Because if so, I don’t thing acting and story in this would be worse by a large margin and creature, set design, and world building seems to be even more turned-up-to-eleven awesome

If you think that Fifth Element is as bad as i.e. Jupyter Ascending, I think you wouldn’t distinguish this new one from both of them …

Ohhhhhh this is based on that comic that Star Wars ripped off. Neat!

Ok, I think I need to find that Valerian et Laureline animated series

This is the first time I hear of this movie, judging by the trailer I think I will enjoy it.

I have a sense that I wont like the male actor, just looking at the trailer he seems to “overplay”(cant come up with a better word right now) his acting just a bit too much.

Alot of CGI and action in a “Fifth Element/Hitchhikers Guide to the galaxy setting” will be enough to fill my need for space opera, that started from watching Guardians of the Galaxy. This movie wont come close to being as good, and I dont think anyone else thats not a big fan of Sci-Fi will enjoy the movie.

Needless to say im just spewing out loose predictions based on opinions watching the trailer.

I will probably love the movie!

I have seen the Fifth Element, and I think that it had steller actors in it, that could hold the ridiculous roles they were put in. Fifth Element to me always seemed a send up of the dystopian sci-fi films that where around in those times, not at all serious, and I enjoy it for that.

But take off your nostalgia goggles for a second, you have an actor who played the worst Green Goblin in the worst Amazing Spider-Man film, also out of Chronicle. And a model, she looks damn pretty, but she is a model, she could be a good actress one day but you saw Suicide Squad, do you think she can give a lead actress role credit yet? Give her more roles, then maybe but either can’t carry a film like Bruce Willis did in Fifth Element.

This film is trying to be serious, not silly, not a send up, serious. And it will come across badly done because of this, because they need the film to be serious, to give the graphic comic fans the justice the company who is financially backing this thinks it needs so they can get their day one money.

That is a bleak outlook but I have yet to see a company who is not doing this besides the uncommon few in this genre.

I wasn’t saying the CGI is the indicator of this will be a bad film, I am saying the use of CGI in this one film is like the films I have mentioned in my post, tacky, badly done and forced in to make something look good but fails at doing so.

That whole scene is green screen, CGI awfulness that looks like the scene were Channing Tatem is gliding around on hover boots as a glitter elf. The creatures, aliens and such look amazing, so did the ones in John Carter which I enjoyed the first half of. Plus this does not have the creative minds that Marvel Studios do which have been crafting their art since 2008, and even they have not got it all down still.

You need practical effects, you need something to make it look real, otherwise you get that sense of being taken out of a film and being bored because you can’t immerse yourself into a world that doesn’t feel real when watching. Jurassic Park, Star Wars: Force Awakens, The Dark Knight, even Inception (it’s mind boggling) they all had practical effects that drew you in and you enjoyed yourself immensely no matter if you liked them or not ( more than most did).

Anyway I think I need to see more to make a full judgement, but as of this trailer they are not going to be making any fans, or film goers besides the small majority come out of it and sing it’s praises.

This film is trying to be serious, not silly, not a send up, serious. And it will come across badly done because of this, because they need the film to be serious, to give the graphic comic fans the justice the company who is financially backing this thinks it needs so they can get their day one money.

Ok then, I really hope that they would actually manage to do the exact opposite

I really want this to be somewhere between Fift Element and Guardians Of The Galaxy.

If what you are telling us is the way they want it, it really does have the smell of Jupiter Ascending …

Valérian and Laureline is the comic, a french one btw. Besson talked about that movie for like 10/15 years, it’s his biggest project !
The first album was like, in the 70s ? It’s quite old, but damn it’s full of stuff. I have a strong Moebius vibe from this comics … I should talk about that in the Sci-fi inspi thread btw