If this style continues, the westmarches area will get steven’s twitter and a note “many people” … there were too many people

If you want to, you could make it a link to http://rollplaywestmarches.wikia.com/wiki/Players, which is a full list of all players, their characters and in what episodes they appeared.

Edit: Nevermind, just noticed I can edit it myself!

I’m on it already

This thread has been added to the !rollplay chat command. Keep up the good work

I think I should ask for logos, so they have a uniform size…

I pulled them from wikis and google (and since the old viewers guide is no longer online, I can’t find a proper logo for vigil. I wanted to place an ehbon and a vigil logo next to each other)

the blades logo is self-made with ultra cool photoshop skills

If this style continues, the westmarches area will get steven’s twitter and a note “many people” … there were too many people

I think the best way to do this is to use the summary tag.

HTML seems to work within those tags so try it and see how it goes.

the forum does not seem to like it when we mix HTML code and its own code. that’s why all the links are in <a href=""> format, and not the easy [text](url) version. I think the tables are messing with the system…

the CoS part took it… don’t know why something else didnt work then, earlier

edit: did the westmarches cast…

added the link to the patreon. The image was taken from the youtube video. Maybe @TwitchSurgeon has has a better Rollplay Patreon logo.

Maaaaan this and the One Shot version of this is turning into something super cool. Love that it’s added to the itmebot as well

This is what I wanted from this community with people coming together and creating things.
I’ll try to get a Patreon logo for you guys but I have a lot of things this month so I might need to take a small step back for a little bit.

while you’re at it… I would like to add official logos to both guides (the one-shot one doesn’t have any, yet)

one more thingy… when browsing the forum, the pinned posts get excerpts. is there a way to manipulate them? because the first sentence would be more than enough, at least for my two posts that are up there…

but I’m done for today

I’ve been tinkering a bit…

Someone asked for twitch links, and I’ve added DriveThruRPG to the resources. 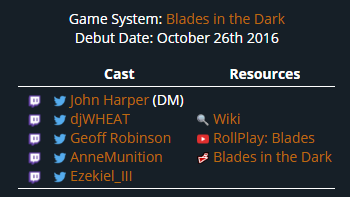 There’s a problem, though! The images that I use have been uploaded with this editor.
File name local:

edit: and there’s another problem with twitch links - the click counter… the icons would not be aligned at all (which would look silly, and at the very least bug me out), unless the counters can be disabled!

You are talking about the post’s character limit?

Yes, that was the missing word

I wonder if the @admins can increase the post count.
If that can’t be done I suppose a solution would be to use the post (making it a wiki as well) below the initial post as a continuation

The RollPlay viewer’s guide continues in the next post (link)

@TheDesec The Mad Scientist!
Gave you guys another 10K characters

Found a piece of CSS code for clickable tooltips… tinkered a bit… Try it here!

I don’t fully understand the code, yet. For example: I have no clue how to disable the circular alignment and make it straight. And the shadow settings are weird.

But I think clicking on a name and getting a menu for twitch, twitter and youtube links is the way to go…

That being said - it’s CSS, so someone would have to put the finished version into the CSS file for the forum… no idea if that’s something possible, or if you guys want that… but then it’s a feature for everywhere on the site!

Only basic HTML is allowed here so no CSS. The CSS would mess up the colors etc of the community.

That’s what I’m getting at… someone at your end would have to edit something like this into the CSS code! It would be so neat and tidy

Ah I see! It might be possible it would basically add another summary tag that’s a social media summary pretty much.