We finished the card!

The rules are simple, the card is a combination of all of the conferences Dropped Frames is covering, simply check off the box of the event that occurred.

This is a “for fun” bingo card, there are no rewards

We’ll still take suggestions up until an hour before the EA Conference (June 10, 2:30pm EDT)

Use either bingo card (sorry for the inconvenience) 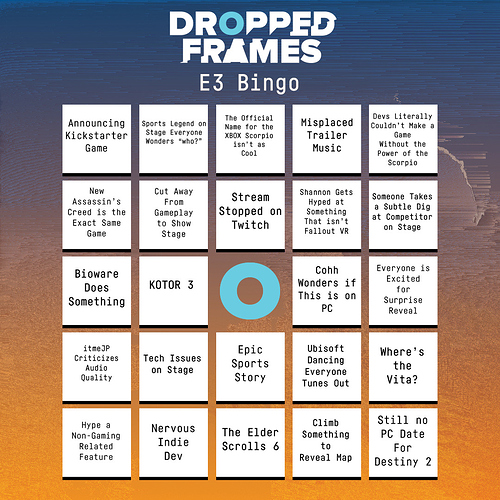 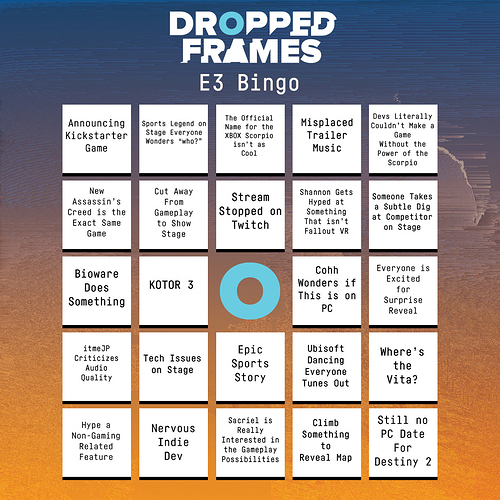 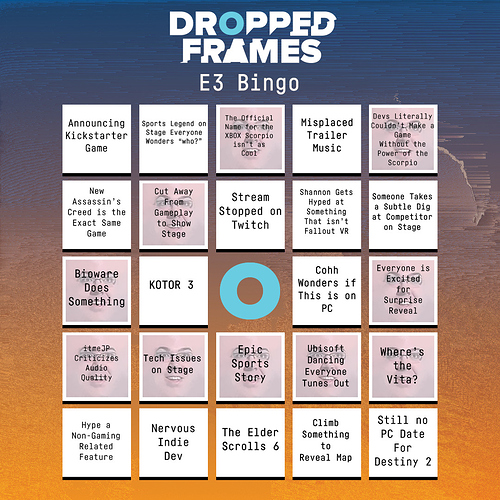 KOTOR 3 in every tile

This is all good, but what about a drinking game?

With towelliee returning this year again, Im sad there is no Nipple rubbing square

love it, can’t wait to use it!

That’s actually the free spot - he rubs his nipples so hard, they’re deprived of oxygen.

This is broad enough to totally make a drinking game out of it, and I’m sure there will be a load of things going on that’s shot worthy over the course of the weekend!

The Bingo results after the EA conference 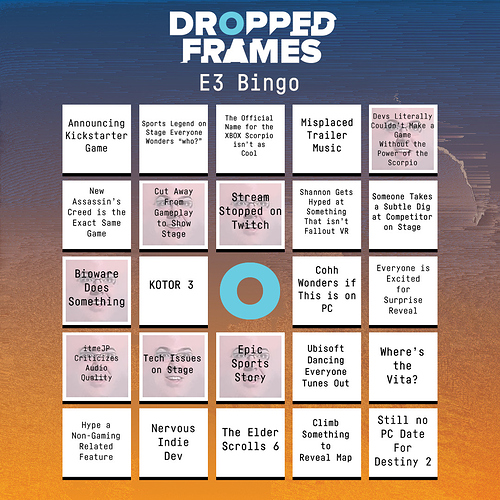 Edit: received feedback from people who want to still see the text underneath.

Nice, Why isnt the “Bioware does something” marked off? Or are you waiting for tomorrow to do that?

EDIT: Also with sacriel not being on DF, Can that one possibly be replaced?:o(Might be to late XD)

you are right I could make the bioware book right now. Sadly its a bit late to replace the Sacriel box.

After feedback from @boeiee and some discussion. The card has been updated and the Sacriel box has been replaced.

The bigger question is why you would think they would already announce TES6 when they just did Fallout 4 in 2015.

Anyways Todd Howard and Pete Hines have said multiple times it is many years away.

They dropped big hints that TES6 will be a pretty deal. I expect it to have the settlement building from Fallout 4 and be fully VR compatable (Todd Howard showed off a Fallout 4 VR conversion last year. This was the proof of concept).

It’s also possible that this game isn’t TES6 and is a different, maybe new IP (they’ve dropped hints at something big that ISN’T TES/Fallout, and I am asuming they weren’t talking about Quake and Prey). Meaning TES6 will come even later than 2019.

Well, I personally don’t care. This is just a fun option for the bingo card. Which is again just for fun there are no prizes.

it was also speculated on the Pre-show, so i think it is a nice fit too^^

The progress of the bingo card after day 2. Also the “Stream stopped on twitch” was unchecked because I misunderstood the meaning. It is supposed to mean the stream going down. 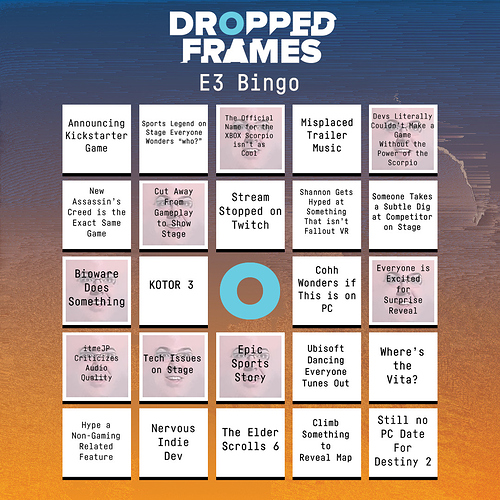 Idea for next years bingo: Bethesda does something

This final result of the DFE3 Bingo Card.

Congratulations, and thanks for playing along.

If you have any feedback we would be happy to hear back from you so that the next iteration of these community events get better.

Edit: Clarification - We know there was a vita game shown in the sony pre-show but it was not in the main Sony Conference so that is why it counts as a bingo.

Edit 2: I should tick off the dig at competitor box, but it does not matter now. I was reminded Microsoft did that all through the conference (I tune out Phil Spencer